Navius Research is pleased to release How Resilient are the Canadian Oil Sands to Carbon Constraints? In this brief, Jotham Peters critically evaluates a July 2012 study by Massachusetts Institute of Technology (MIT), which suggested that achieving Canada’s targets for greenhouse gas emissions would significantly reduce the rate of growth of Canada’s oil sands. By replicating MIT’s analysis using our GEEM model, which is tailored to the Canadian economy and energy system, Navius shows that: 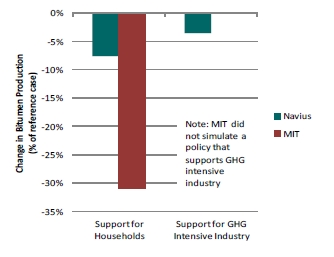 This figure compares the impact of climate policy on Canadian oil sands sector output as estimated by Navius with that estimated by MIT.

To learn more about this research, please contact Jotham Peters.

What does a low-carbon fuel standard contribute to a policy mix?

Damage Control: Reducing the costs of climate impacts in Canada

Under Water: The costs of climate change for Canada’s infrastructure

A study on the energy storage market in Canada